We have been busy over the last few weeks on four separate architectural modelling projects.  The first of these is back from the printer.

The Salvation Army Citadel in Castlegate, Aberdeen.  We chose this building as a personal project,  mainly because it is such an iconic building in Aberdeen,  but it also has interesting shapes, turrets and battlement in the Scots Baronial style. The original design is by James Souttar 1893-6.

Our model was originally created for screen use only.  As is usual with computer generated graphics,  there are a lot of shortcuts made in the modelling process.  Roof shapes need not be stuck on, they just need to be in the right place.  Columns only need three sides if the back face is never seen. Mouldings can hover in place without the need to model them from the flat walls they appear against. None of these sloppy habits cut it for 3d printing.  Overlapping and floating shapes are not allowed.  The file you send to the printer has to describe a unified and manifold (watertight) shape that the machine can understand and make.

Despite us having the original version of the model,  it took several days work to stitch together and unify all the parts into a single shape.  There are software packages that can do some of the processing,  but they make a mess of your mesh and often create more problems than they solve.  Most software can handle and fill holes.  Overlaps cause havoc.  In our experience, it is worth doing the job right (i.e. manually).  By preserving the orderly structure of the mesh, you end up with a digital model that is much easier to work with and make adjustments. Vital if you change the scale or want to combine with other models in the future.

Perhaps the most critical decision for a building model is the scale.  Our original intent was to print at 1:200 scale,  however,  by reducing the scale to 1:220 we almost halved the 3d printing cost.  3d prints are priced on the volume of material and the machine space occupied.  For this reason,  it is important to choose scale carefully and make the model hollow, with holes to allow unused material to escape during the printing process.  Printing larger than shoe-box size as a single print gets very expensive.

We were keen to push the boundaries of the printing materials.  Care had to be taken to get wall-thicknesses right.  Too thin and the model would have weak spots and holes in it.  However, we were able to safely experiment with surface detail.  Some of the finest details have indeed been lost in the printing process,  but we are impressed that some tiny details are still visible and have added to the general interest of the model.  For example,  a few doors have panelling visible when the model is lit from the right angles.

Finials for the top of the turrets and about 20 chimneys are being printed separately.  Printing these as separate parts reduces the risk of the whole model having to be rejected,  and also creates the possibility of using different materials, more suited to their tiny size.

We will be showing this model (and others) at our stall at “The Ultimate Business Show” TUBS 2017 on Wednesday, April 26th at the AECC.  Come along and take a look for yourself. 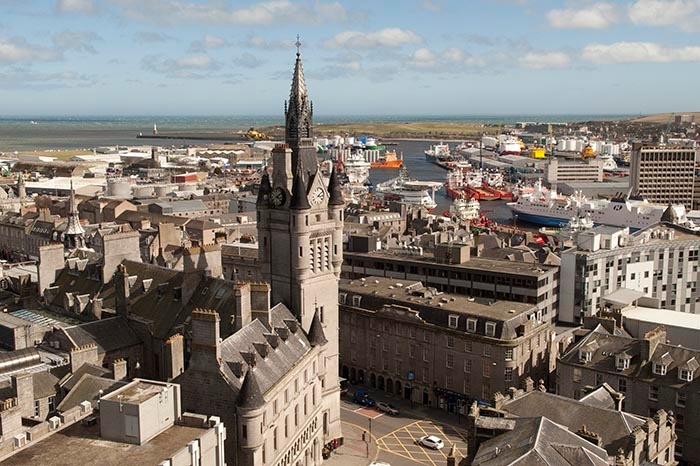